Choose Your Own Street Light Adventure | Voice of San Diego

Choose Your Own Street Light Adventure

A neighborhood watch wants more street lights in on its block. It has three options.

Fong Krause has noticed a lot more people walking around at night in the seven years she’s lived on the 2800 block of Juniper Street.

“The neighborhood’s changing, with South Park and the whole hipster thing down here,” Krause said.

Recently, her neighborhood watch decided to look into getting more street lights on the block. The group needed someone to investigate the process and chose Krause — a decision made, Krause said, after she looked up at the wrong point during the meeting.

After leaving phone messages for various city departments — Krause says none were returned — she called her city councilman, Todd Gloria. A Gloria aide told her she had three options. Her group could ask the city to do it and wait, petition a local mini-government (some neighborhoods have maintenance assessment districts, mini-government entities that collect fees from property owners) or pay San Diego Gas & Electric to install them.

This decision is both unique to Krause and her neighborhood watch and one faced by groups wanting to install street lights across the city. San Diego’s street light policies depend on where you live. Your neighborhood determines who can install them, how much they’ll cost and when they might arrive. 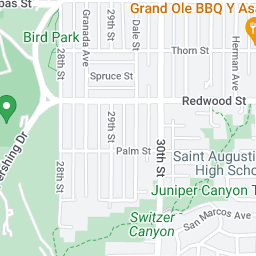 Here are its street light options, as outlined by Gloria’s office:

City Hall: Free, But You Might Never Get Them

The policy has turned out to be easier said than done.

Street lights for the 2800 block of Juniper would have to go on the list. Gloria’s aide told Krause relief might come through the giant infrastructure bond that’s been batted around City Hall. But that option is far from appearing on a ballot, let alone receiving voter approval.

The MAD: Still Free, But You Still Might Not Get Them

North Park has a maintenance assessment district, which collects fees from property owners. Single-family homes and condos each pay $22.10 annually to finance the North Park MAD. Commercial property and multi-family residences pay based on the size of their property or number of units.

The MAD uses the money to plant and trim trees, keep up medians and sidewalks and clean streets. They also installing and maintain street lights.

Homes within Krause’s neighborhood watch fit just in the North Park MAD’s boundaries. But the MAD just finished installing street lights along seven blocks and is running low on money for future efforts, according to minutes from a recent meeting.

Currently, the city has 49 MADs. If your neighborhood doesn’t have one, you’ll have to rely on something else for more street lights.

SDG&E will install street lights when people ask through its Dusk to Dawn program. It takes about four to six weeks. No fuss, no muss.

It’s about $15 a month to have a new 100-watt street light in a residential area, company spokeswoman Gina Jacobs said. The bill goes to one electricity customer, but neighbors often pitch in.

Right now, SDG&E is managing 7,000 street lights through the program.

“We’re glad we can fill the gap where we can,” Jacobs said.

There’s one catch. The program only works on blocks with overhead power lines and wooden poles. If your power is underground then it’s impossible.

Krause isn’t sure what she’ll recommend to her neighborhood watch when it meets on Thursday. She knows she doesn’t want to choose the city.

“I’m guessing that if we’re going to wait for the city to put in street lights for us, we shouldn’t hold our breath,” Krause said.

Correction: This post has been corrected to reflect that SD&GE’s street light program can’t accommodate areas with underground power.

'My Job Is Not to Help Them': Business Districts Increasingly Target Homelessness